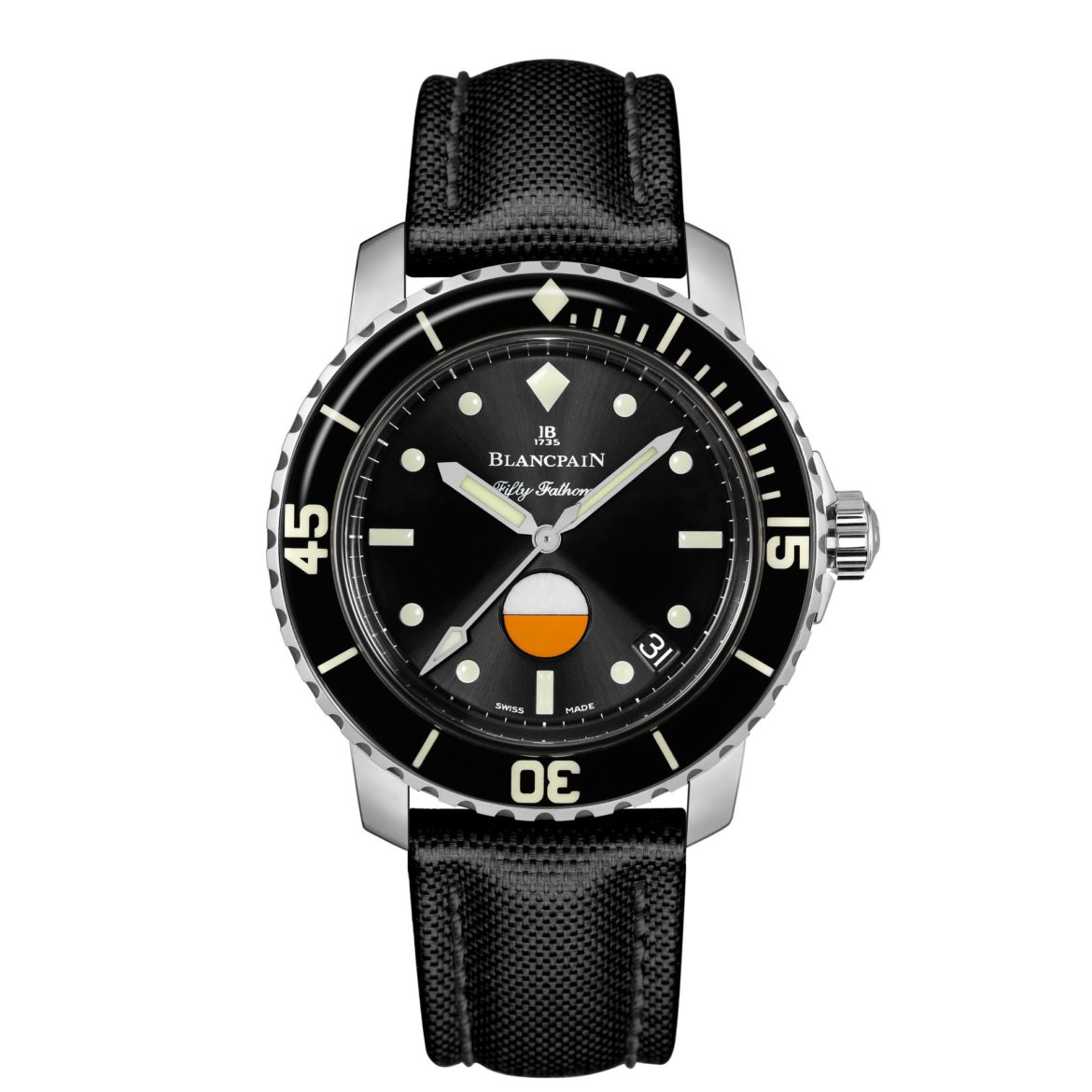 Looking back at old models, preferably with a light military or rugged touch, is extremely popular at the moment. The recent 2017 trade shows SIHH and Baselworld showed many new military-based models. Blancpain’s addition to this trend is the Blancpain Tribute to Fifty Fathoms MIL-SPEC.

Now, a fathom is a unit of length to measure the depth of water and equals 6 feet (2 yards or 1.8288 meters). In the 1950s, when the French navy was searching for a suitable watch for their frogmen, the depth of 50 fathoms was their minimum requirement for a watch. About 91,44 meters, 100 feet. Several French watchmakers struggled with creating a watch that could meet the French requirements, Blancpain was the only one who succeeded in this. In 1953, the Fifty Fathoms was born. 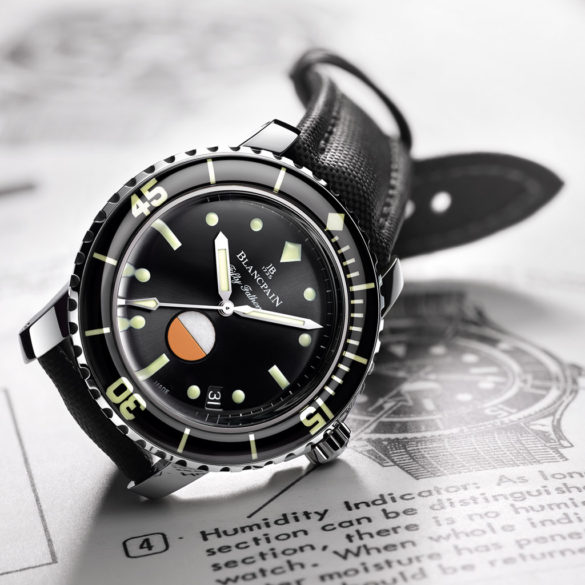 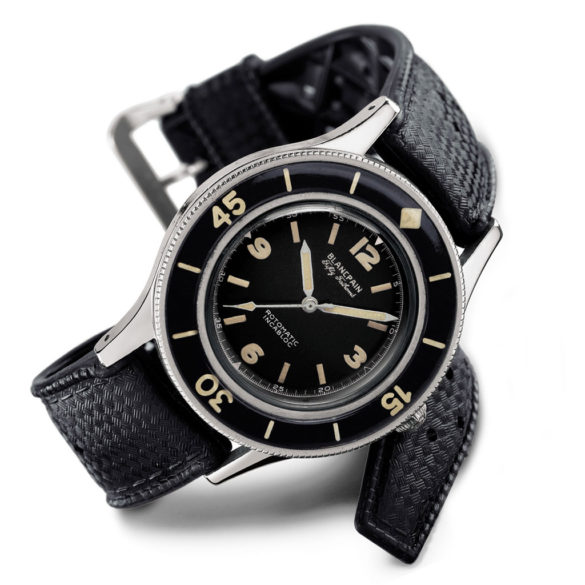 This Blancpain Tribute to Fifty Fathoms MIL-SPEC is based on the original MIL-SPEC 1 from 1957, a model designed by sport-diving pioneer Jean-Jacques Fiechter. Who also was Blancpain’s CEO between 1950 and 1980.

Blancpain’s old CEO Fiechter developed more safety features for divers and, amongst other things, created a circular water-tightness indicator. If, by chance, liquid was to leak into the watch case, a round aperture at 6 o’clock signals the problem. The color changes from white to red. The trick behind that? Inside this feature is a material that changes color in the event of a moisture ingress. When it is dry, it is white, half of the circle. The more moist, the more orange/red the half circle becomes. Which leads to a full orange/red circle (the lower part seems not to change) telling you your watch is about to die. 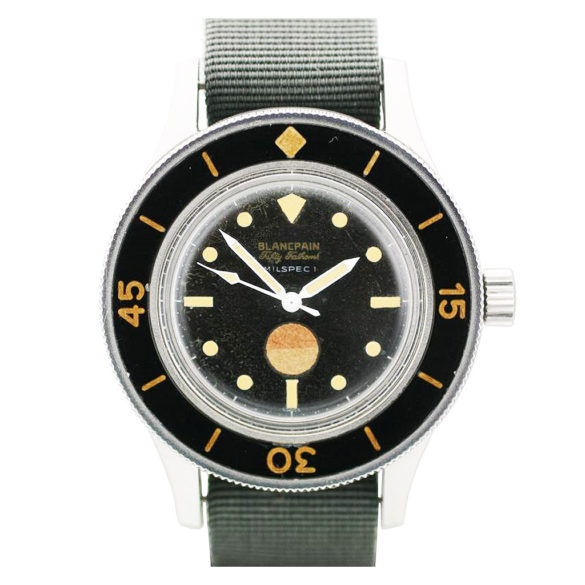 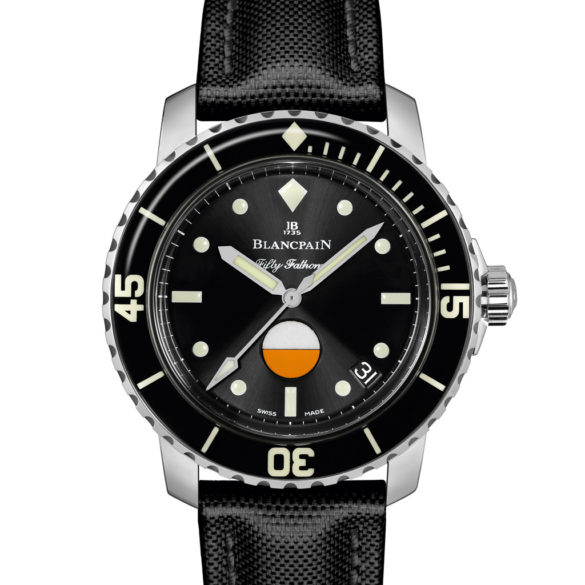 This water-tightness indicator was present on the dial of the Fifty Fathoms model called the MIL-SPEC 1 (Military Specifications 1). This one was introduced in 1957/1958 to meet the strict requirements of the military. In the early 1960s the MIL-SPEC 2 was released, an evolution of the MIL-SPEC 1. Later, this MIL-SPEC 2 model was replaced by the TR-900, also known as the Tornek-Rayville. The water-tightness indicator became a requirement of the American Navy, and was incorporated in all these models.

In the 2017 version the 40.3-millimeter case has a similar ‘dot’ on the dial which monitors if there are any leaks, but this time it is cranked it up to 300 meters instead of 50 fathoms. The new version also has other typical Blancpain diving features. Like a matt black dial with super-luminnova indexes and a uni-directional bezel covered in scratch resistant sapphire. A Blancpain innovation to protect the luminescent indication underneath. The Blancpain Tribute to Fifty Fathoms MIL-SPEC is limited to 500 pieces. 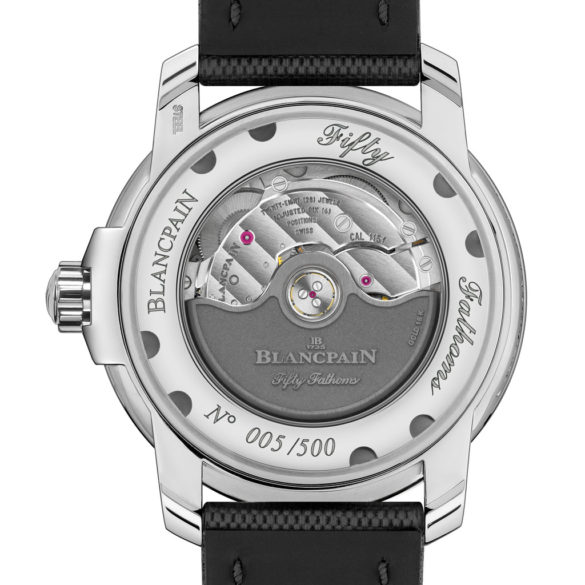 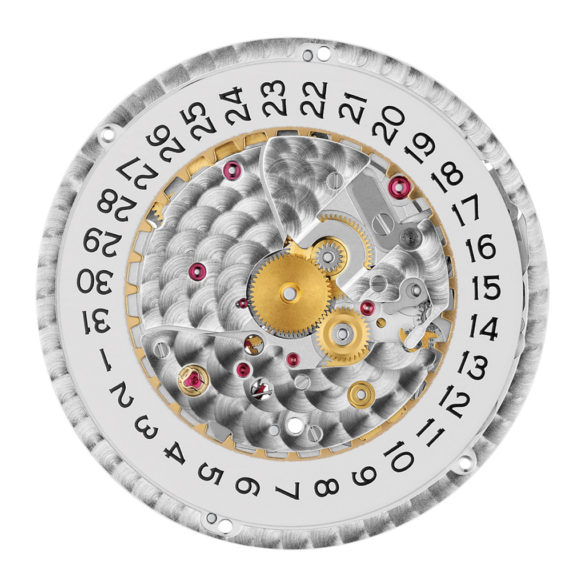