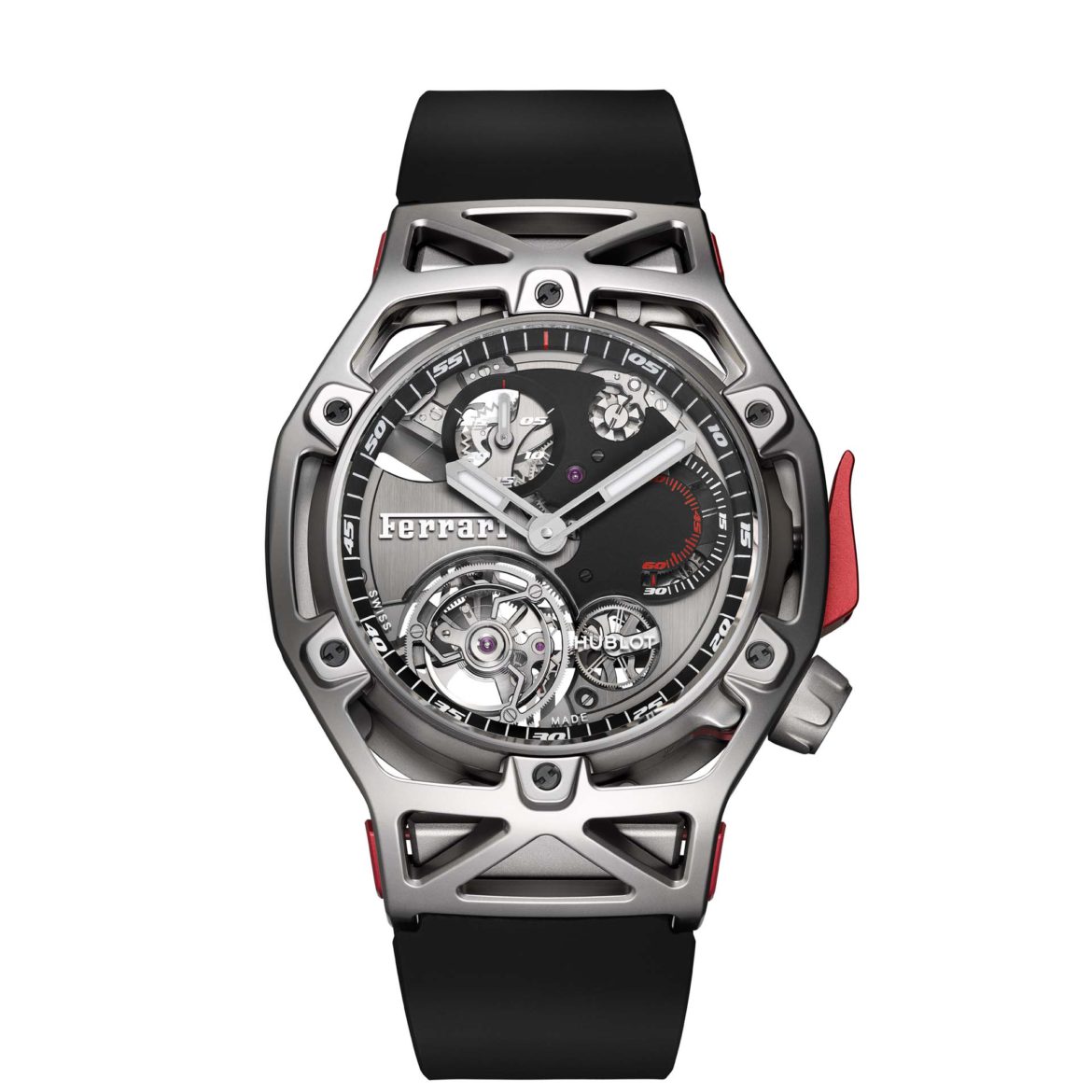 Designed by Ferrari, made by Hublot. This Hublot Techframe Ferrari 70 Years Tourbillon Chronograph has been drawn up by Ferrari Chief Designer Flavio Manzoni to celebrate 70 years of the legendary Italian car manufacturer. Although it depends how you look at this moment. As Enzo Ferrari established his company Auto Avio Costruzioni on the 13th of September 1939, in Modena, Italy. And in 1940 he produced his first car, the Auto Avio Costruzioni 815. (Only two models were made of this 2-seater barchetta, one still exists.) The inception of Ferrari was in 1947, when they launched the first car with a Ferrari badge, the Ferrari 125 S.

Most of the collaborations between car brands and watch brands end up being somewhat superficial affairs. Hublot and Ferrari on the other hand have ended up doing more together than all the other watch and car-collaborations combined. The last one before this Hublot Techframe Ferrari 70 Years Tourbillon Chronograph dates from the end of 2016 when an updated version of the Hublot Big Bang Ferrari Unico was launched. To be honest, you have to appreciate the extravagant design, but nevertheless this is refreshing. Especially in a time when a lot of special editions are nothing more than a new color and some simple engraving. 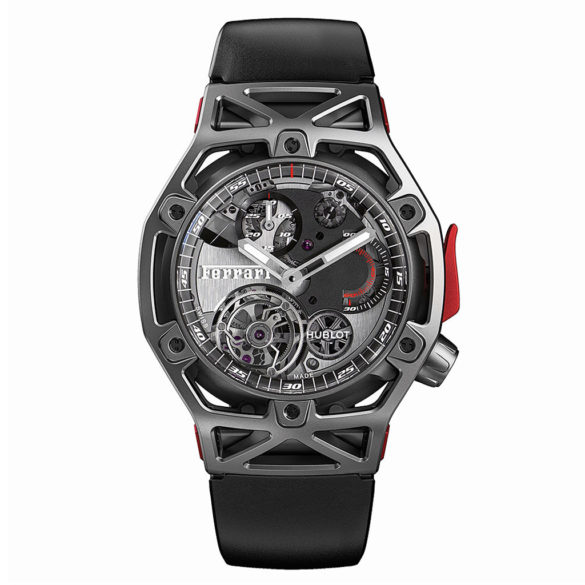 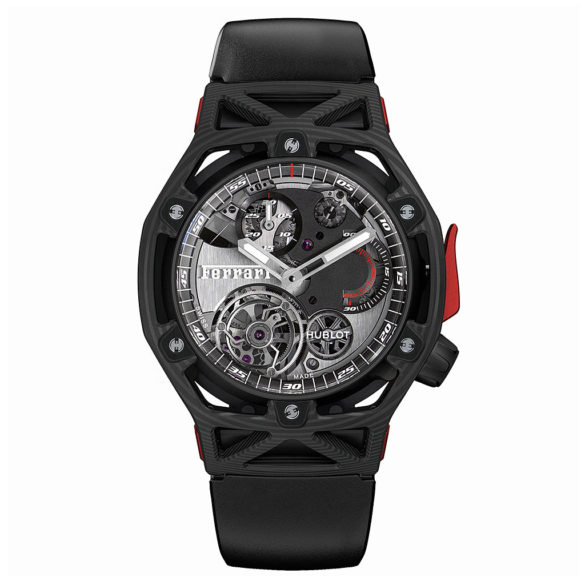 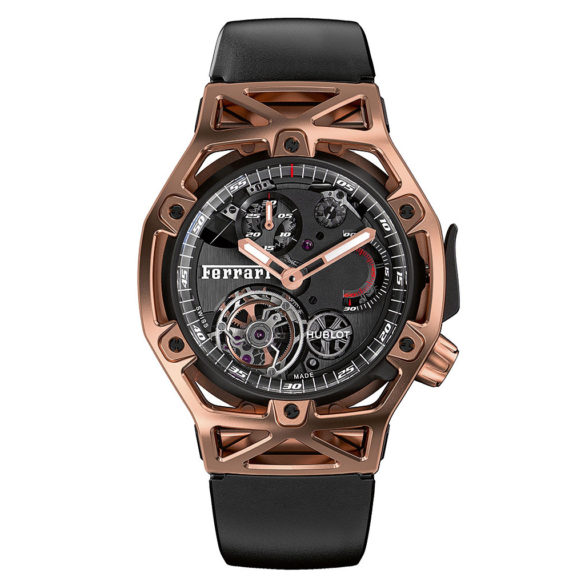 Ferrari’s designer Flavio Manzoni was inspired by the lightweight chassis that Ferrari uses for their cars. The result: a lightweight time piece with a skeletonized frame which houses Hublot’s caliber HUB6311. This movement has a column-wheel chronograph and in-house Hublot tourbillon. It offers a massive 115 hours of power-reserve. The tourbillon seems to be floating, a flying tourbillon, but this is an optical illusion as sapphire crystal holds the upper parts of the tourbillon.

The chronograph is a single pusher, operated by the red button at 3 o’clock. So, the crown has moved to the 4 o’clock position. According to Hublot this makes the watch more ergonomic, less big and easy to use, even when driving. A matt black block affixed to the sapphire dial holds a race-inspired twin half-second counter at 3 o’clock. The minutes counter is at 11 o’clock and the column-wheel can be seen at 1 o’clock.

The Hublot Techframe Ferrari 70 Years Tourbillon Chronograph is available in three versions: titanium, PEEK carbon (Polyether Ether Ketone carbon) and king gold. Each one is, of course, limited to 70 pieces. The video below the specs shows more of the watch. 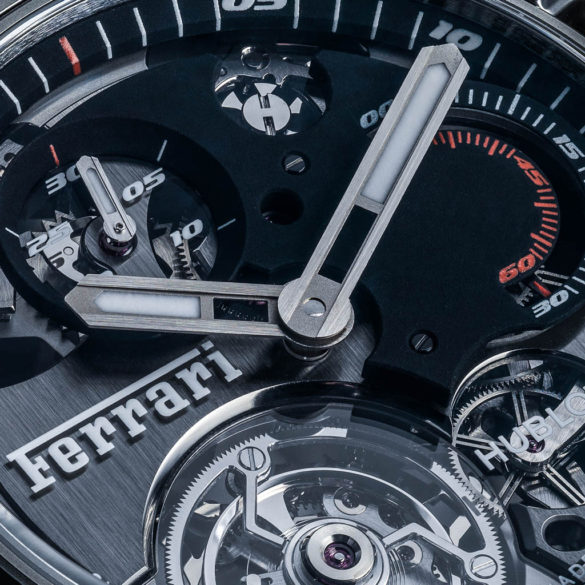 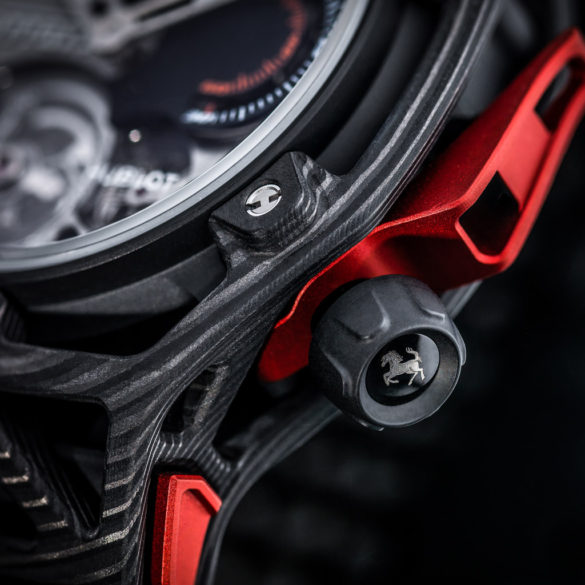 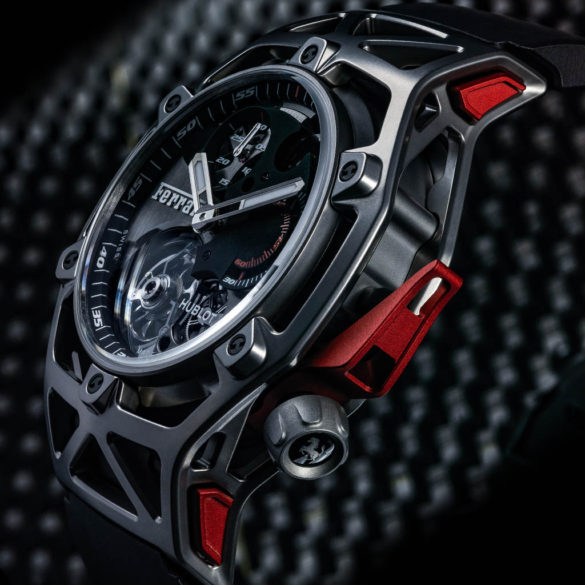 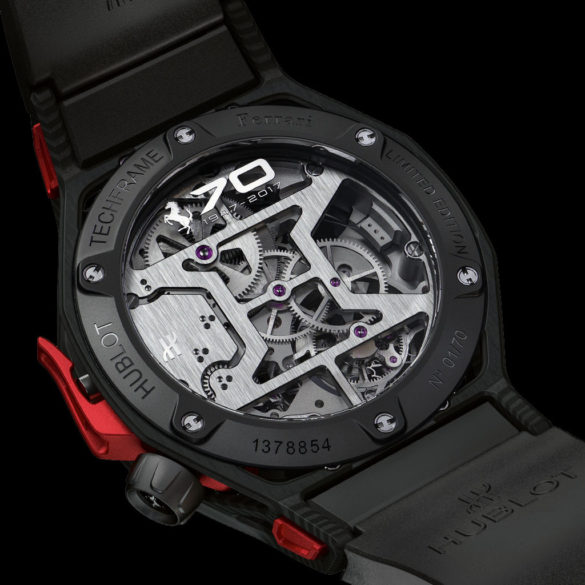