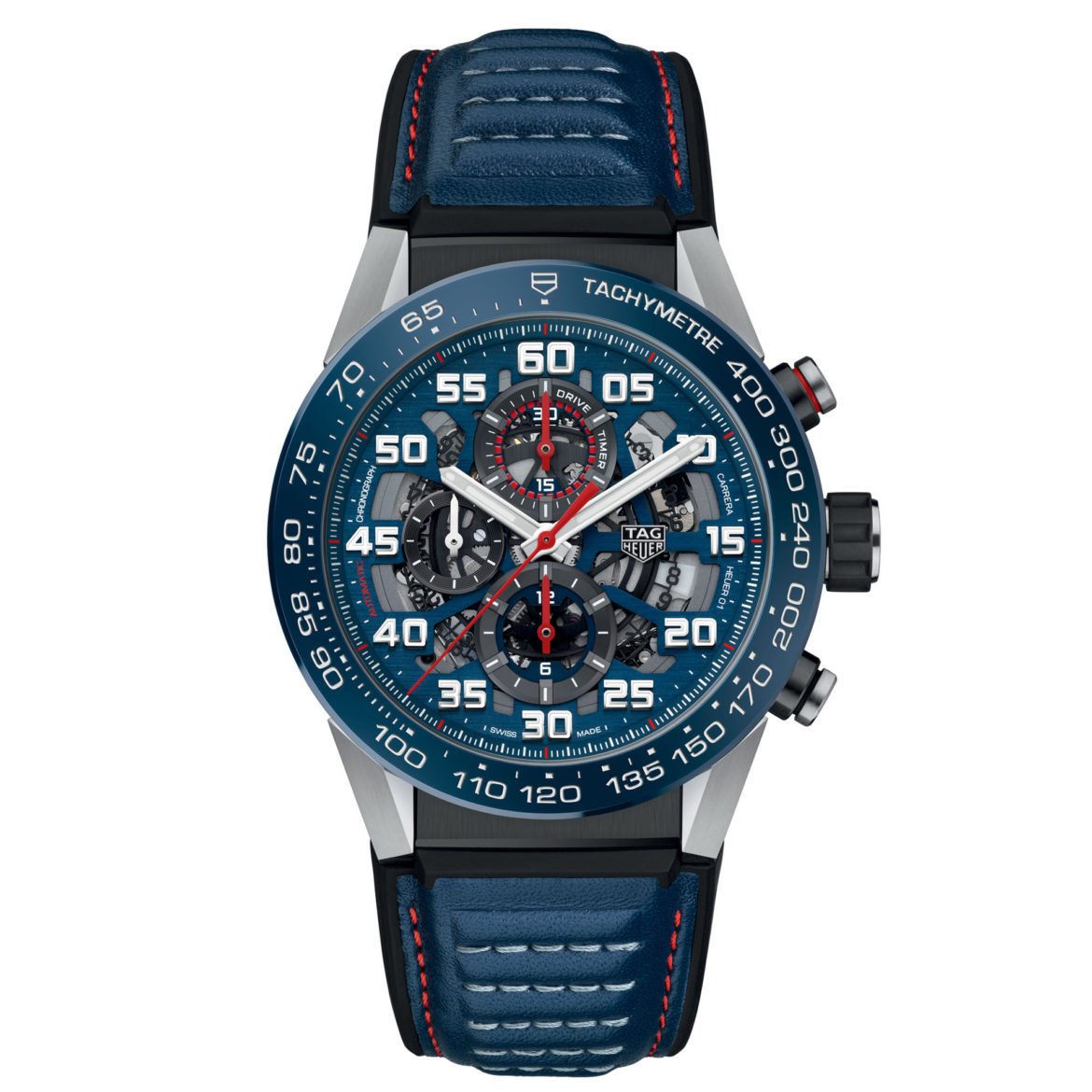 The partnership with Red Bull Racing is one out of many sponsorship deals TAG Heuer has. So, each year TAG launches a couple of new models dedicated to those deals. Last year, when this deal started, TAG launched a few new models. Like the one, with the longest name ever: TAG Heuer Formula One Max Verstappen Youngest Grand Prix Winner Special Edition. This TAG Heuer Carrera Heuer 01 Red Bull Racing is the 2017 model of RB’s Formula One racing team. Other models will follow.

TAG Heuer is the Official Timekeeper, Official Watch and Team Performance Partner of Red Bull Racing. A mouth full meaning both Red Bull drivers have to wear a TAG Heuer (lucky guys!). And the name of their cars is officially Red Bull Racing-TAG Heuer RB13. In F1 terminology this indicates the car has a TAG Heuer engine. That is a kind of bollocks as the engine comes from Renault. Nevertheless, it sounds good. The name. The engine could be better. 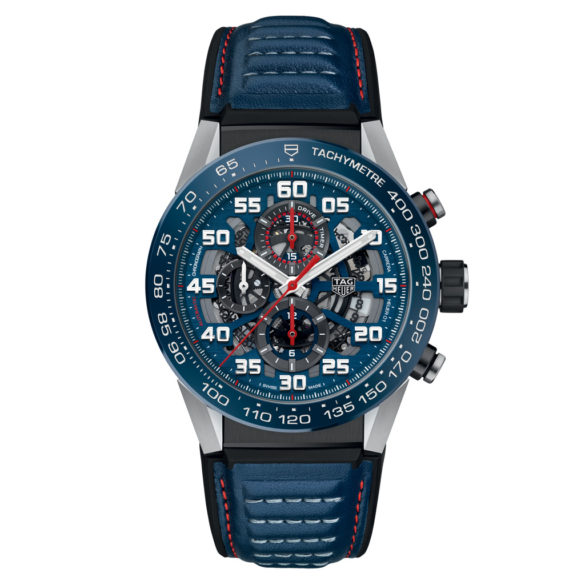 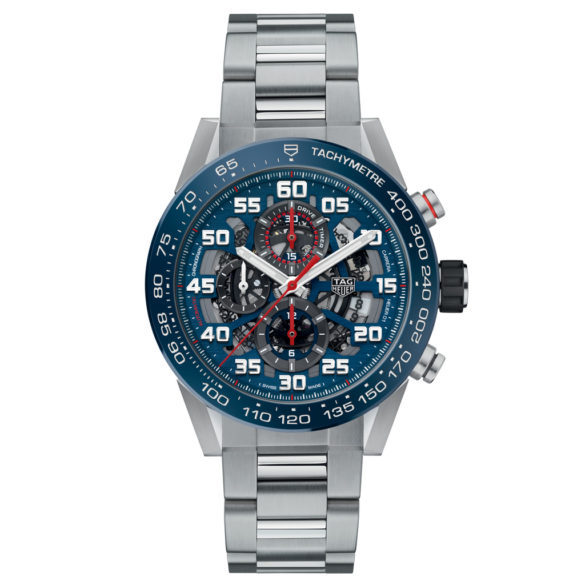 Last year Red Bull Racing was quite successful with the flying Dutchman Max Verstappen and the Australian hero Daniel Ricciardo. The Formula One team from Mercedes appeared to be unbeatable but Red Bull was chasing their tail. This new season it seems Mercedes is still unbeatable and Ferrari has done some proper engineering during the seasonal break. Unfortunately Red Bull struggles with their Renault engines. But both Verstappen and Ricciardo gained so much popularity and sympathy last season that their market value is still rising by the day. Which is good for TAG Heuer as this open-worked new model is an attractive time piece for the fans. 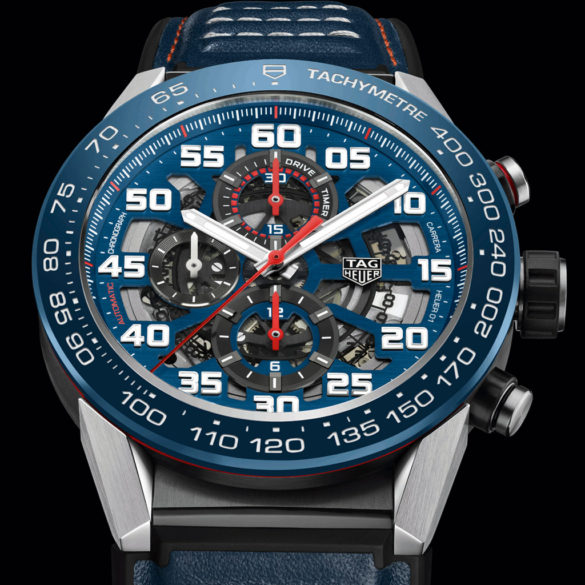 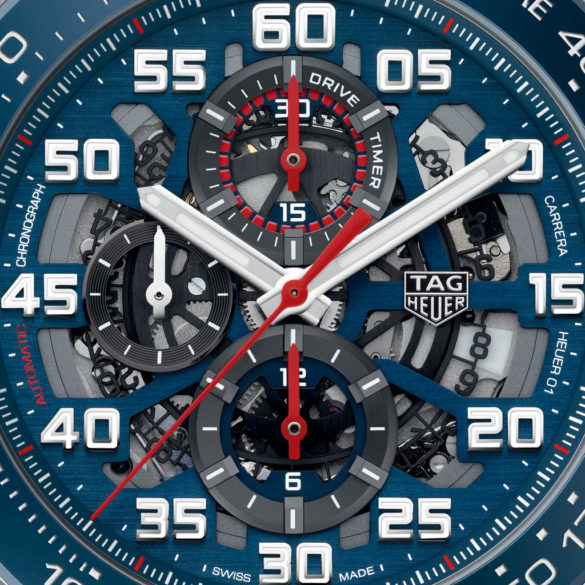 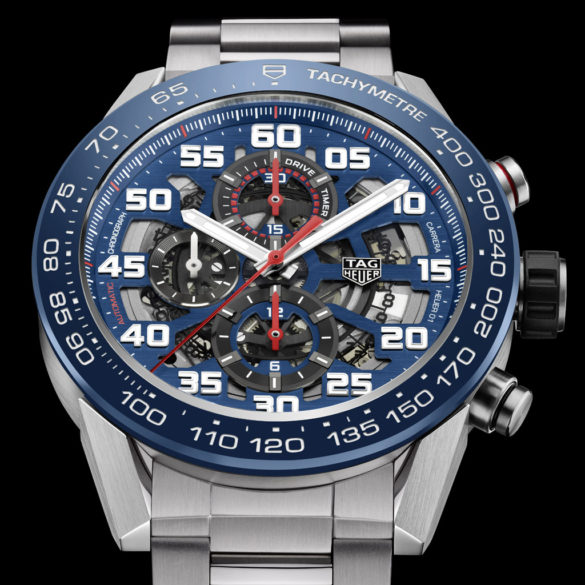 The TAG Heuer Carrera Heuer 01 Red Bull Racing houses TAG’s caliber Heuer 01. It features a column-wheel chronograph and date with a power-reserve of 50 hours. The open-worked dial in the 45-millimeter case as well as the see-through case back provides a good view on the movement.

The colors of Red Bull, blue and red, are nicely represented and the TAG Heuer Carrera Heuer 01 Red Bull Racing comes in two versions. One with a steel bracelet and one with a blue leather strap. That is the one to go for as the strap is enriched with red topstitching and a racing car seat effect to make is look even more sporty. And if you buy the one with leather strap you will also get a black rubber strap as well.