Should you focus on marketing and just release as much models as you can or should you stick to traditions and just make quality watches that sell themselves? Since 2016 TAG Heuer is the official timekeeper of the Premier League, England’s top division in football, and that already resulted in a new model. But sponsoring the Premier League isn’t cheap so TAG seems to want more turnover out of that deal. By becoming ‘official timekeeper’ of Manchester United. Which is probably an extra deal on top of sponsoring the Premier League. This TAG Heuer Carrera Heuer 01 Manchester United Special Edition can help earning back these sponsorship investments.

Manchester United, aka The Devils, happens to be the richest football club in the world. Last month the yearly Deloitte Football Money League 2017 was published (mirror). It reports about the highest revenue generating clubs in the world of football. Manchester United broke all records with an annual turnover (season 2015/2016) of more than 740,000,000 US dollars (£ 515.3m / € 679,2m), just before Barcelona and Real Madrid. The biggest parts of ManU’s turnover came from Chevrolet, Adidas and the Champions League revenues. However, an additional ‘fee’ from TAG Heuer is more than welcome considering ManU’s top-player Paul Pogba earns about 420,000 US dollars (382.000 euros). A week.

The TAG Heuer Carrera Heuer 01 Manchester United Special Edition is a cool watch, despite the football shizzle on it 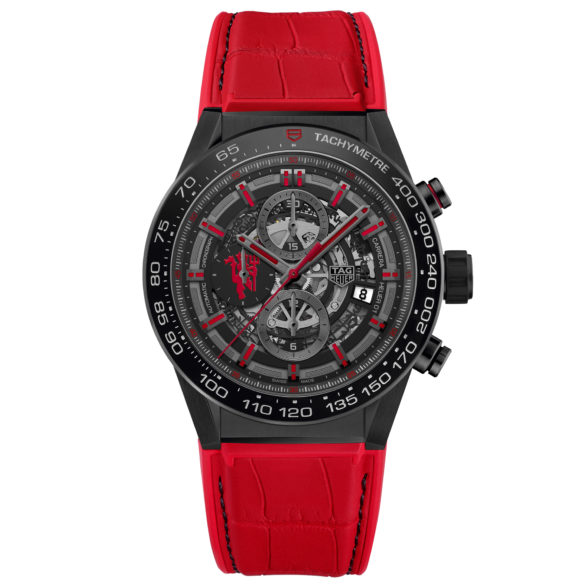 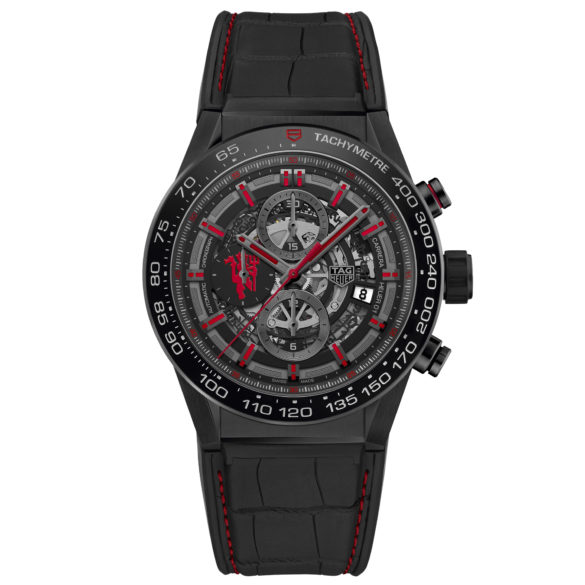 Looking at the first question, it seems TAG Heuer aims for both. Marketing and traditions. Some think TAG Heuer is flushing its brand values down the drain by sponsoring all kinds of events and brands. It doesn’t matter if those partners are not part of your own genes, just take some pictures with your sun-burned CEO and send-out a press release. Others think it’s smart to stay on top of mind. Give your brand a human face, with a reliable looking grandpa who smiles all the time, showing positive vibes with successful partners. Although City fans will never buy a TAG Heuer again (wait, they can!). It’s the marketing part.

The Heuer-01 caliber is here to save this model

For TAG Heuer it is easy to create a new model like this TAG Heuer Carrera Heuer 01 Manchester United Special Edition and stick to traditions. Creating a valuable time piece with proven mechanics. The well-known and reliable caliber Heuer 01 is on the shelves. A 45-millimeter modular case too, in steel, PVD coated, ceremic and more. For this model, TAG Heuer combines a black PVD steel case with a ceramic bezel. The skeletonized dial looks like the dial of the TAG Heuer Carrera Heuer 01 Full Black Matte Ceramic (which has a better price, by the way). They only had to add some Manchester United-stuff; red stiches on the strap or a red strap. The small second counter has a lacquered opaline black plate with red Manchester United decal logo. And the transparent case back has a red engraved Manchester United logo.

We think it is a cool watch, despite the football shizzle on it. But we would always go for the ‘neutral’ version of it. Even though we think Zlatan is God.

The watch is limited to 1,000 pieces. For less wealthy fans there is a less interesting but cheaper TAG Heuer Formula 1 Chronograph Manchester United Special Edition. The name doesn’t make sense at all as there is no connection between F1 and The Devils other than TAG Heuer is sponsoring (parts of) them. That version is not limited, four times cheaper and has a quartz movement. 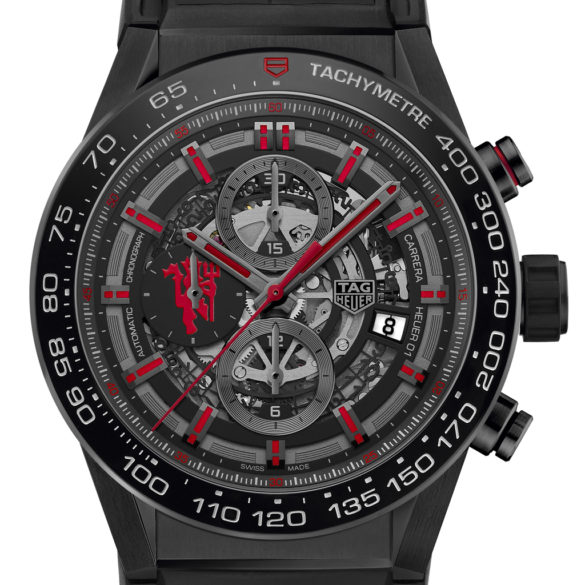 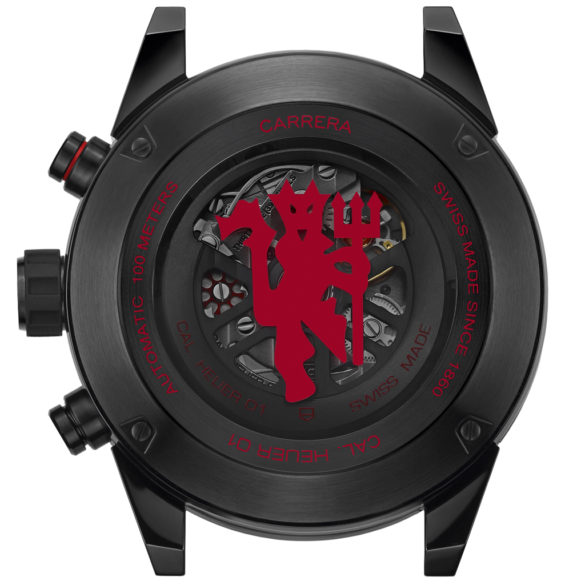 Did you know that founder Edouard Heuer patented his first chronograph in 1882? Here you can read more about the history of TAG Heuer…