With this Certina DS Podium Chronograph Lap Timer Racing Edition the Swiss brand shows its racing genes once more. Despite their logo, a turtle. Certina is part of the Swatch Group, like dozens of other brands, and one of the brands focusing on motor sports. However, with limited budgets. Rolex is doing the Formula One on the tracks, TAG Heuer does the Red Bull team, Hublot the Ferrari team and IWC supports Mercedes. Certina was partner of the Sauber F1 team for a few years but switched to another league: the ADAC GT Masters.

It’s a bit of a switch from reading The Washington Post to the Rutherfordton News. But both can contain outstanding journalism. The ADAC GT Masters is a race cup held on German, Austrian and Dutch circuits and it is loaded by cool GT cars. Like the Audi R8, Bentley Continental GT, Corvette C7, BMW M6, Lamborghini Huracán, Mercedes SLS and Porsche 911. Don’t be surprised if these monsters make more noise than Formula One cars and offer more spectacle. 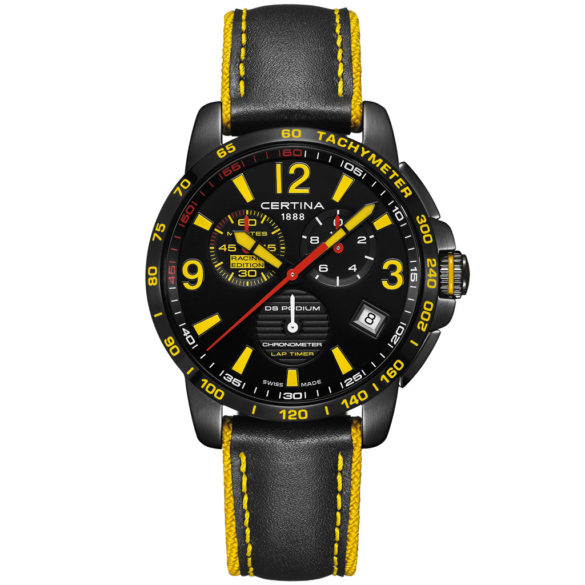 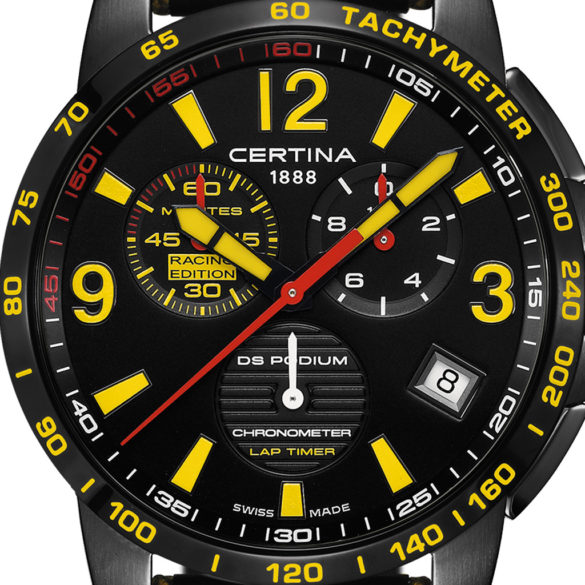 This Certina DS Podium Chronograph Lap Timer Racing Edition celebrates the partnership between Certina and the ADAC GT Masters. Which is why the watch has a black and yellow color scheme, the official colors of the main sponsor of the racing series. ADAC is the German equivalent of the AAA in the US or AA in the UK. We think it is not the best or most fancy color scheme for a watch, perhaps the reason why you don’t see it that often. Which makes it kind of unique.

Inside the very friendly priced chronograph is the reliable ETA G10.212 AJ Precidrive quartz movement, here with COSC certification. Which means it’s accurate and can withstand heat, cold, shocks and more until a certain level. Great when you are on the Nürburgring behind the steering wheel of a GT Masters Vette.