Rolex Cosmograph Daytona Paul Newman Ref. 6239 – The most expensive watch in the world 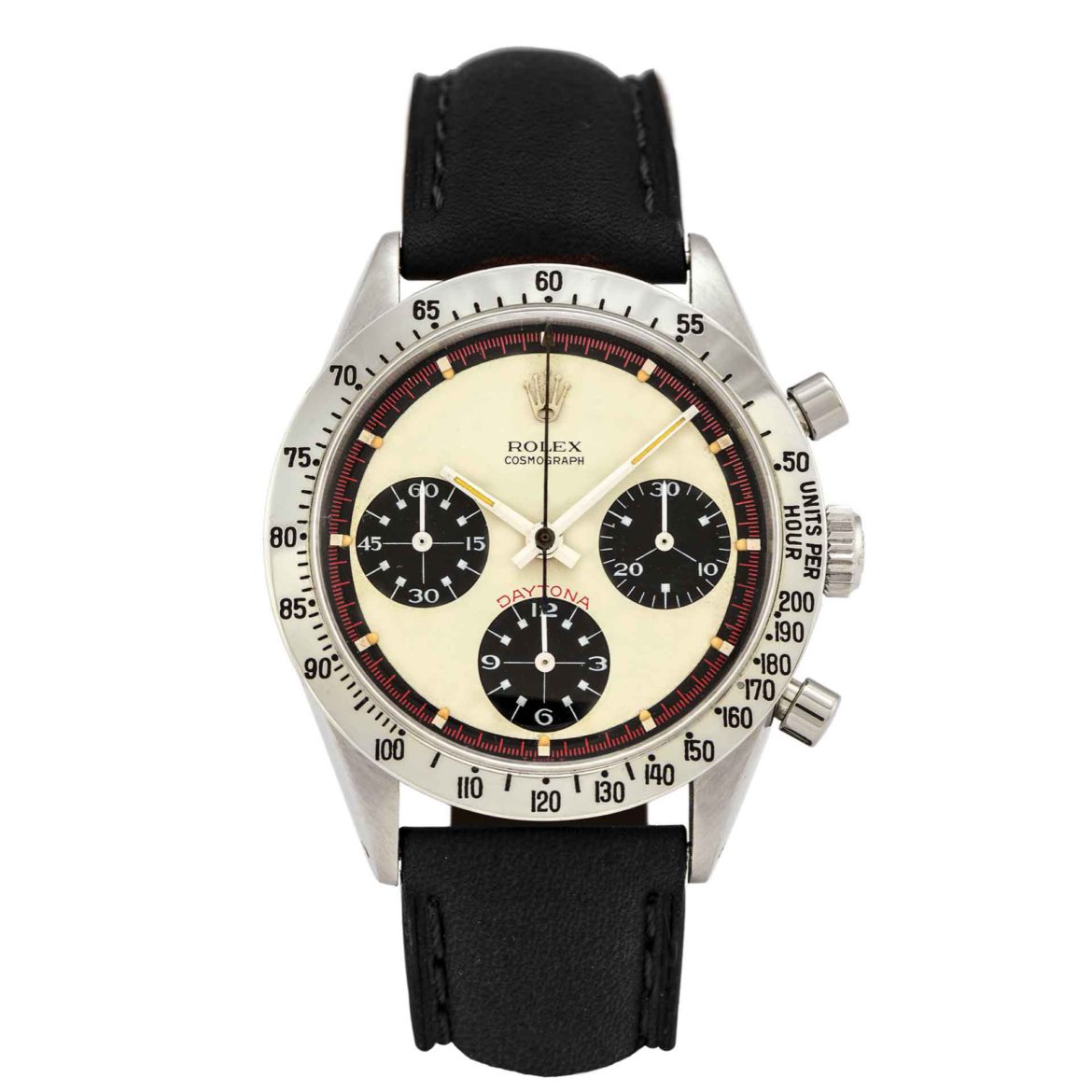 On the 26th of October 2017 the Rolex Cosmograph Daytona Paul Newman Ref. 6239 became the world’s most expensive wristwatch. The old record, around 11 million US dollars for the Patek Philippe Ref. 1518A, lasted just a year. This specific Rolex model* was owned by Paul Newman, which certainly raised the value.

The Rolex Cosmograph Daytona Paul Newman Ref. 6239 was auctioned by Phillips Auctioneers, in association with Bacs & Russo, in New York on the 26th of October 2017. They listed the price ‘in excess of US$ 1 million’. After 12 minutes of bidding it was sold for 17.752.500 US dollars, including auction fees. More than 15 million euro’s and more than 13 million British pounds. Which makes it the most expensive watch in the world. ‘Wristwatch’ we should say, as there is a pocket watch of 30 million. And some watch creations with a bunch of diamonds making it worth even more than 30 million.

Rolex started the production of the Cosmograph Daytona Reference 6239 in 1963, when it was first called Rolex Le Mans in some advertisement of Rolex. In 1965 Rolex started to call the model Rolex Daytona Chronograph and made some changes to the original model. The bezel was graduated up to 300 units per hour with the first 6239 models but Rolex changed it, probably already before 1965, to 200 units per hour.

Furthermore, it got a dark outer track on the edges of the dial, matching the sub-dials. The lines on the sub-dials are replaced by blocks and the sub-dials got crosshairs. And the seconds sub-dial at the 9 o’clock position got new markers: 15, 30, 45 and 60. This replaced the markers 20, 40 and 60. These are the main specs for what Rolex calls an ‘Exotic’ dial. 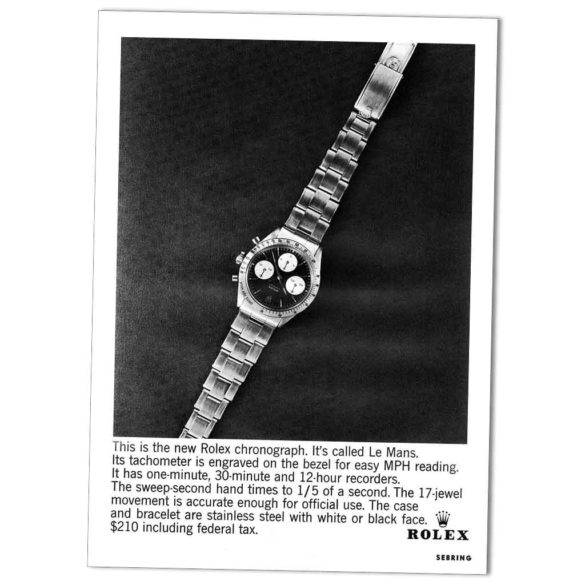 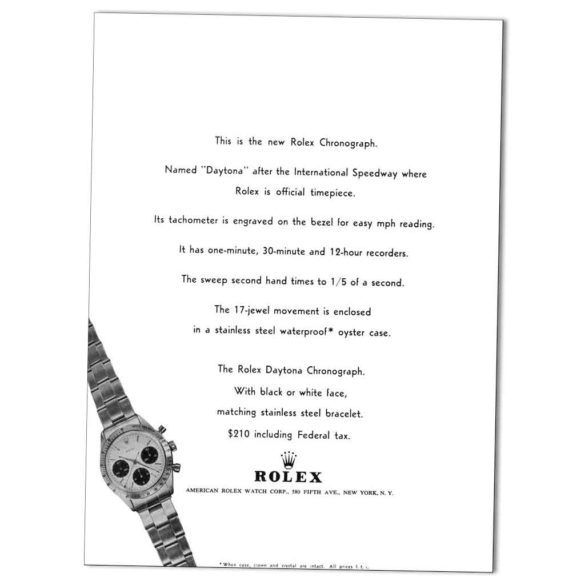 Advertisement of the Rolex (Cosmograph) Le Mans from 1963 and an advertisement from the first Rolex Daytona Chronograph, possibly from 1965

Paul Newman and how he got this Daytona

Paul Newman (January 26, 1925 – September 26, 2008) got this watch in 1972 from his second wife Joanne Woodward. According to Wikipedia Paul Newman was an American actor, film director, producer, race car driver, IndyCar owner, entrepreneur, activist, and philanthropist. He owned several Daytona’s (as well as cheap quartz watches), and it is believed this Ref. 6239 was his first Daytona.

As car racing was a risky sport (and still is in a way) his wife had a special messaged for him engraved on the case back. ‘DRIVE CAREFULLY ME’. There are many photos from Paul Newman with this watch, and the models with two-tone or tri-tone Exotic dials on the Daytona got the nickname ‘The Paul Newman’ Rolex. So, not only Daytona’s owned by Paul Newman have this name. 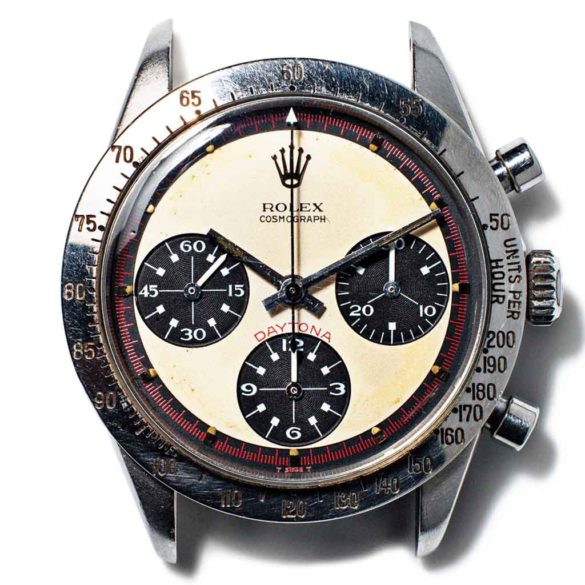 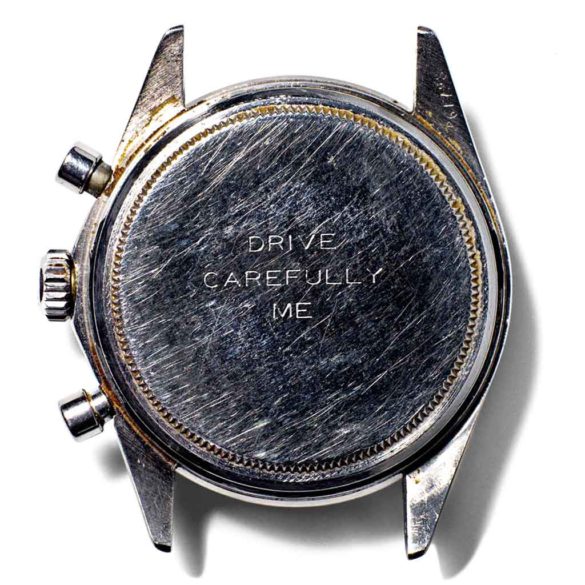 The Rolex Cosmograph Daytona Paul Newman Ref. 6239 was ‘lost’ for a while

For a while, the Rolex Cosmograph Daytona Paul Newman Ref. 6239 was lost. Only last summer The Wallstreet Journal found out James Cox had it. He was dating Paul Newman’s daughter Nell for many years. In 1984 he was gifted the watch by Paul Newman with the words “Here, here’s a watch. If you wind it, it tells pretty good time”. Although they are not together anymore, they remained close friends.

Is the Rolex Cosmograph Daytona Paul Newman Ref. 6239 worth 17 million?

The price is formed by how much the new owner wanted this piece. So, obviously it is worth 17 million to him or her. Besides that, it’s a unique piece, really owned and worn by the legendary Paul Newman. The back of the case should proof that, the fact that the former boyfriend of his daughter, in consult with his daughter, brought it up for auction as well.

One should also consider that the Daytona with exotic dial wasn’t popular at all during the 1960s. In fact, nobody wanted the model, so there are not many copies sold. Although nobody knows how much copies there are, the model is rare.

Only in the late 1980s (mainly Italian) watch collectors found out there are not many Rolex Cosmograph Daytona models with exotic dial and they start collecting them. And gave the model the name ‘The Paul Newman’. Today the model is highly sought after and prices mostly start at around 100,000 US dollars.

It is unknown who is the lucky buyer…