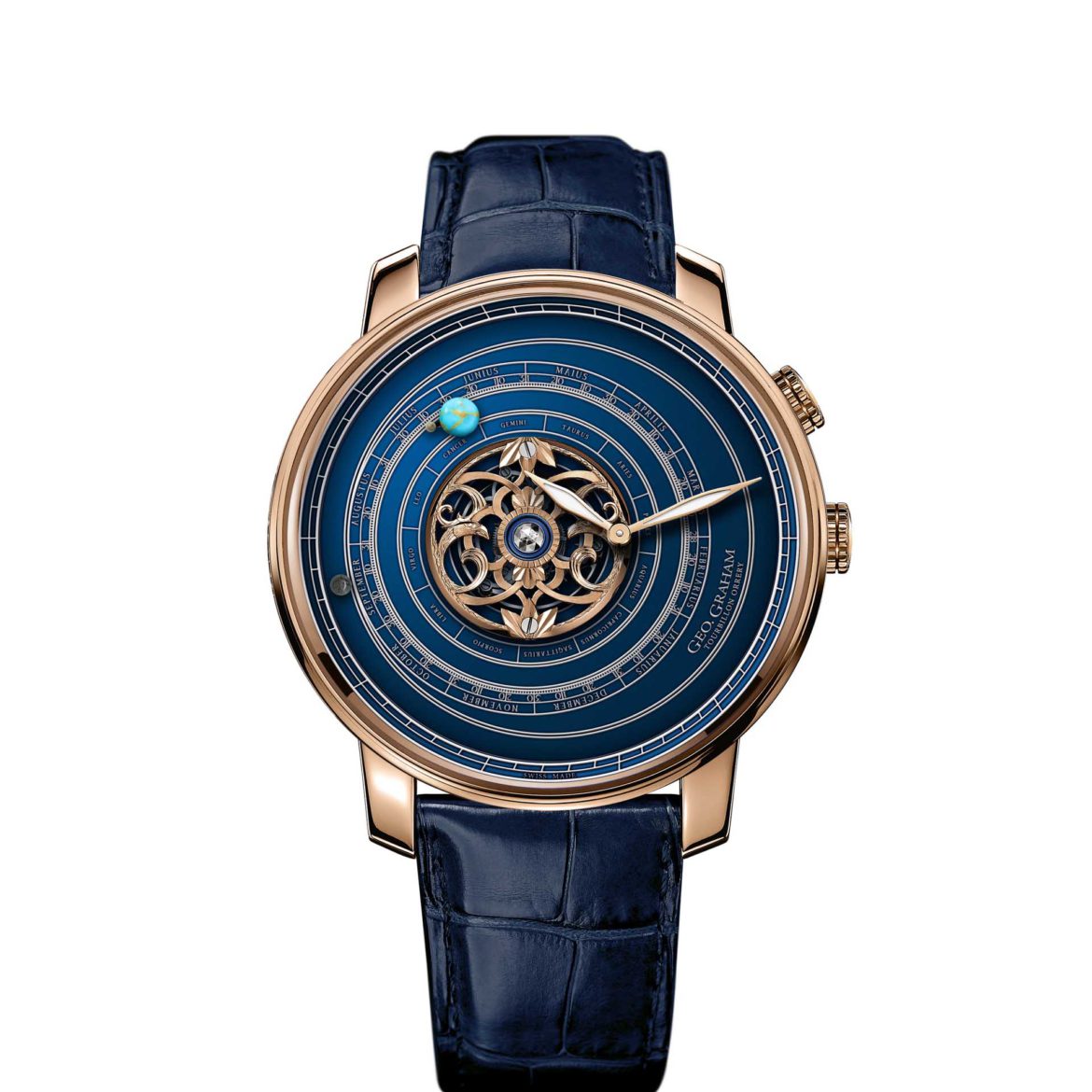 You might know Graham from their big Chronofighter pilot models, with the crown on the left and a complicated trigger system for the chronograph. However, George Graham, the British founder of the company, in 1695, is also credited as the inventor of the orrery. According to the company Graham in 1713, according to Wikipedia around 1704, and together with Thomas Tompion. Anyway, the roots of the brand are closer to a planetarium than a jetfighter. Therefor the launch of the Graham Geo. Graham Orrery Tourbillon isn’t as strange as it seems.

In 2013, the first Graham Geo. Graham Orrery Tourbillon was launched. A manual orrery tourbillon exclusively crafted for Graham by Christophe Claret, limited to 20 pieces, with reference 2GGBP.B01A. This new version has an updated dial with new materials to depict the heavenly bodies. The old one has small spherical gemstones on a black dial. This new one has a blue dial and its mechanical solar system contains genuine fragments of planets. 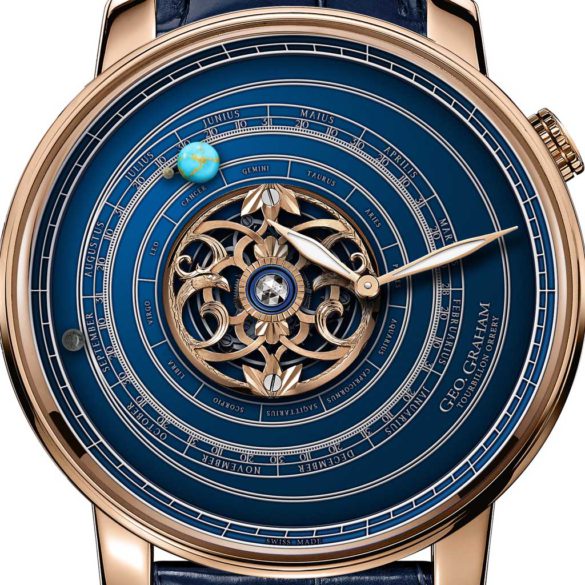 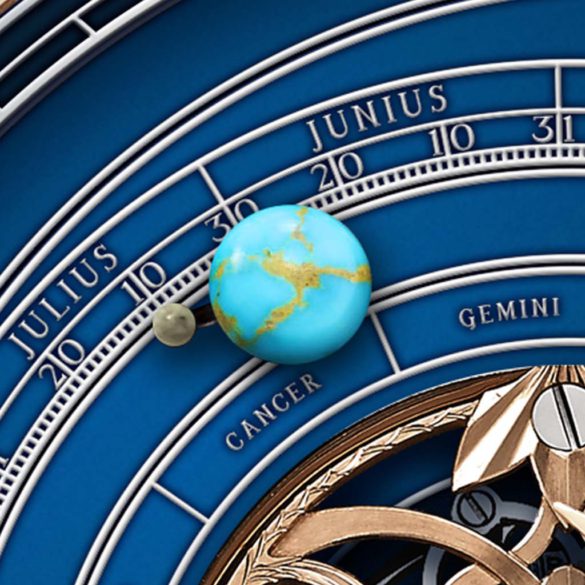 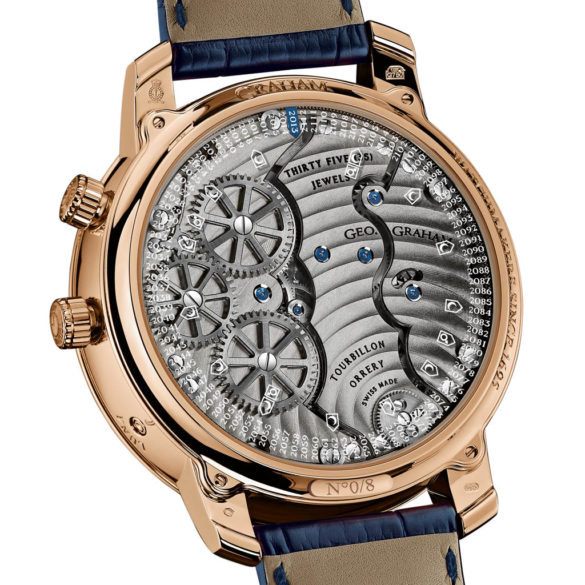 The Graham Geo. Graham Orrery Tourbillon has a 300-year calendar

Four celestial elements are depicted. The Moon is from NWA4881 meteorite, the Earth from Kingman turquoise, Mars is a piece of Tissint meteorite and the Sun is from pink gold. The whole system has a 100-year calendar with two additional graduations of 100 years, 300 years in total. At the see-through case back is the 100-year scale with planet correction indicators: 7 years for the Moon, 25 years for Mars and 1,156 years for the Earth.

On the dial, there are three scales: for the hours and minutes, for the Gregorian calendar (365.25 days) and for the Zodiac scale (12 astrological signs). A miraculous presentation of our solar system. And unique as well, as there are only a few brands with a planetarium. Van Cleef & Arpels has some, Christiaan Van Der Klaauw as well and Ulysse Nardin (already in 1988). And even more unique as the Graham Geo. Graham Orrery Tourbillon is limited to 8 pieces. 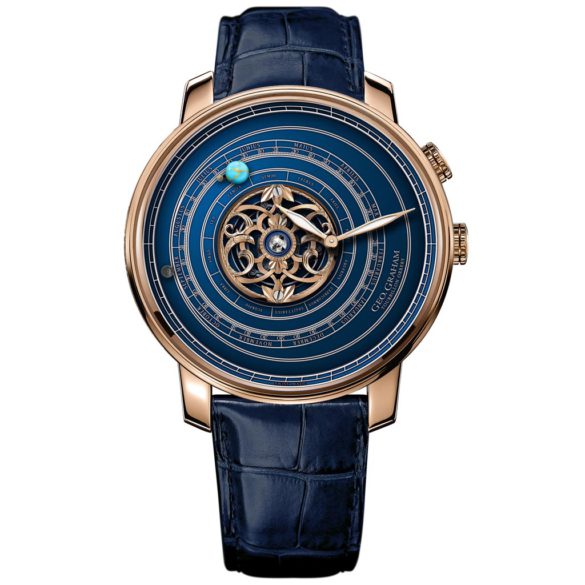 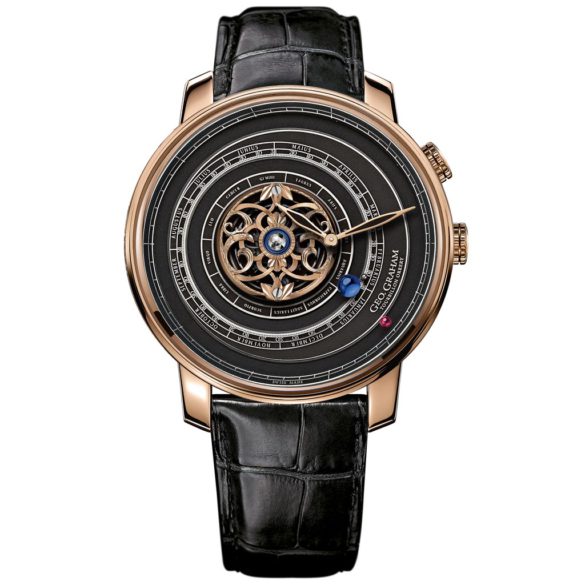