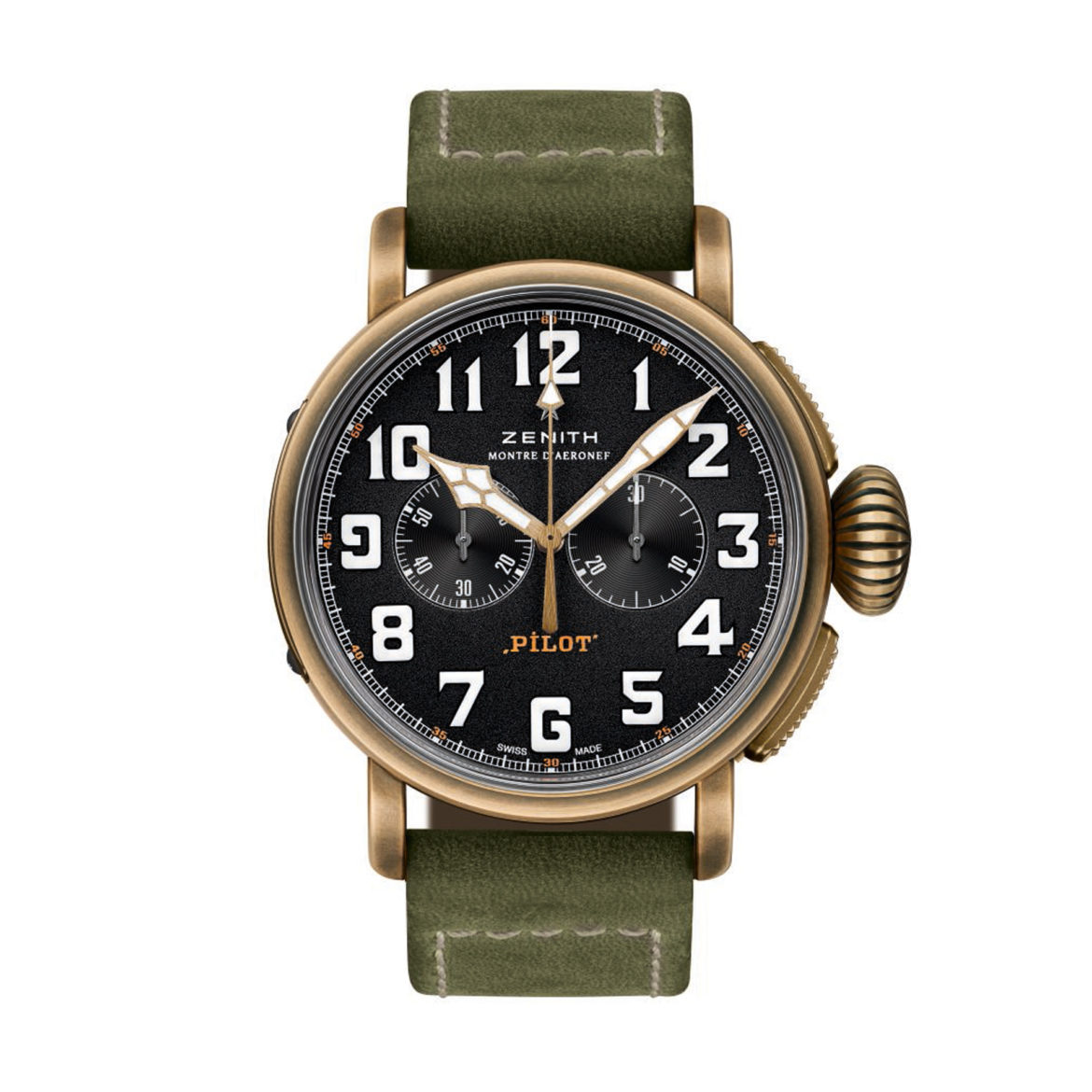 You know when one person ever, ever wore a certain watch while doing something special, the watchmaker will endlessly repeat that moment. That’s how we all know the first man who crossed the Channel between France (Calais) and United Kingdom (Dover) by plane had a Zenith on his wrist. And this new and extremely cool Zenith Heritage Pilot Extra Special Chronograph still refers to that moment, 108 years ago. 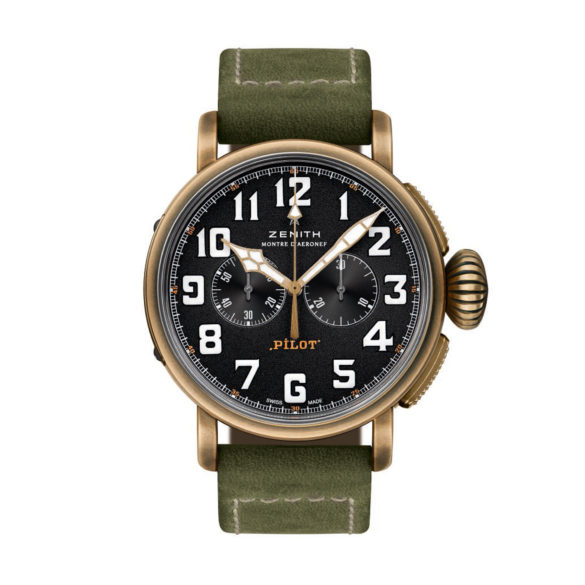 The second watch is the pilot from Louis Blériot which he seems to have worn on the day of his adventure (size unknown, so the scale isn’t correct)

On the 25th of July 1909 at 4:15 in the morning the French aviator Louis Charles Joseph Blériot took off in his self-made plane for a test flight. The plane looked like a mixture of bed sheets, a bicycle and a bird-shaped wooden frame. You can still see it in the in the Musée des Arts et Métiers in Paris. At 4:41, when the wind was good, he took off for his 24-mile trip (40 kilometers), arriving in Dover exactly 36 minutes and 30 seconds later. Without a compass. And with a damaged undercarriage and a shattered propeller blade. 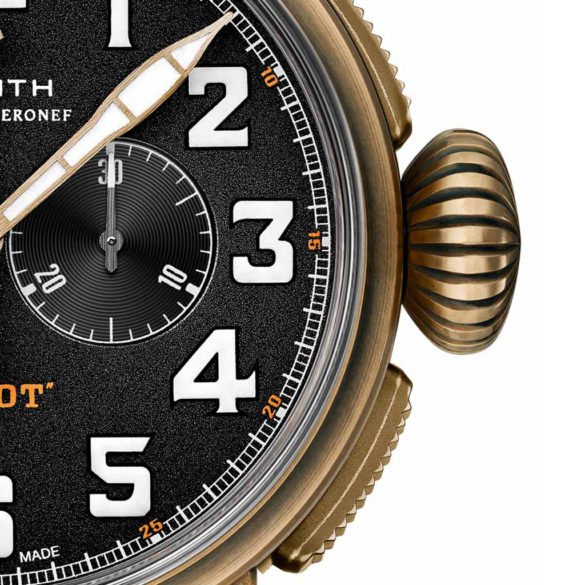 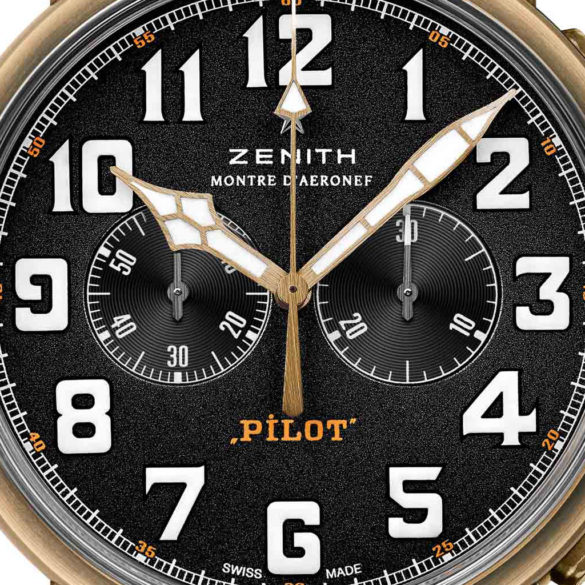 The Daily Mail had offered the one who could make that flight 1,000 pounds, just to get some publicity. And the smart guys from Zenith gave the guy a watch; you never know how much publicity it would score. And it did. Most ‘planes’ couldn’t stay in the air for a few seconds so this was news. And Zenith was there, although we couldn’t find any photo of Blériot wearing a watch. Anyway, 108 years later the brand is still referring to that heroic but historically not very relevant moment. Already in 1785 people crossed the Channel through the air, in a balloon. And only 10 years after the Channel crossing the first nonstop transatlantic flight was made. 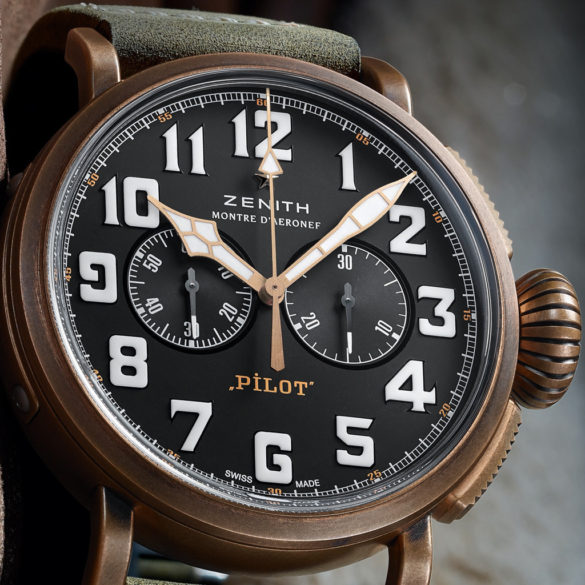 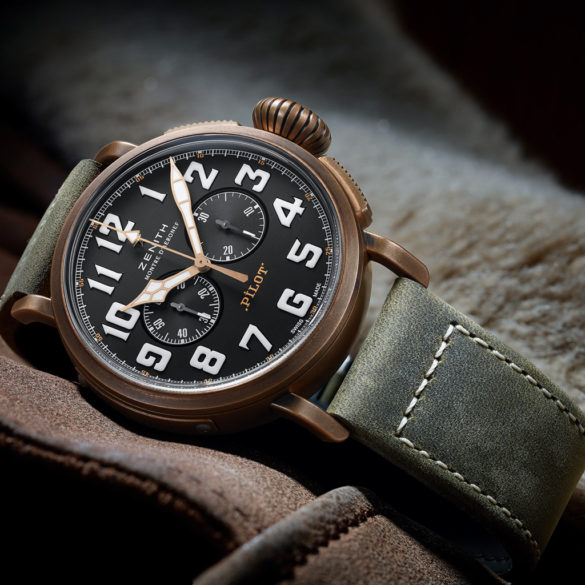 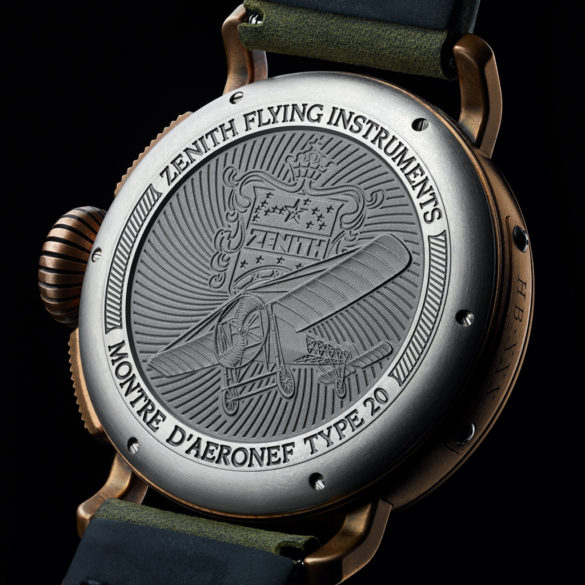 Okay, so Zenith’s marketing machine is still leaning on a 108-year old aeronautical moment, but does anyone care? We don’t think so. And that’s just because this Zenith Heritage Pilot Extra Special Chronograph has everything a modern retro watch needs. It’s extremely cool, we already said that. Its 45-millimeter bronze case, its sandblasted black dial, the classic numerals and railway track, the big onion crown and the nubuck strap form the perfect mix. It houses the El Primero caliber 4069 which features a column-wheel chronograph and provides 50 hours of power-reserve. Enough to cross the Channel. Swimming.

And Louis Blériot? The titanium case back of the Zenith Heritage Pilot Extra Special Chronograph shows Louis Blériot’s plane, the Bleriot XI, with which he crossed the Channel. Along with the Zenith flight instruments logo, complemented by a motif inspired by the fuselage of the aircraft. Just wait until it’s 110 years ago Blériot crossed the Channel; we bet there will be a Limited Edition.