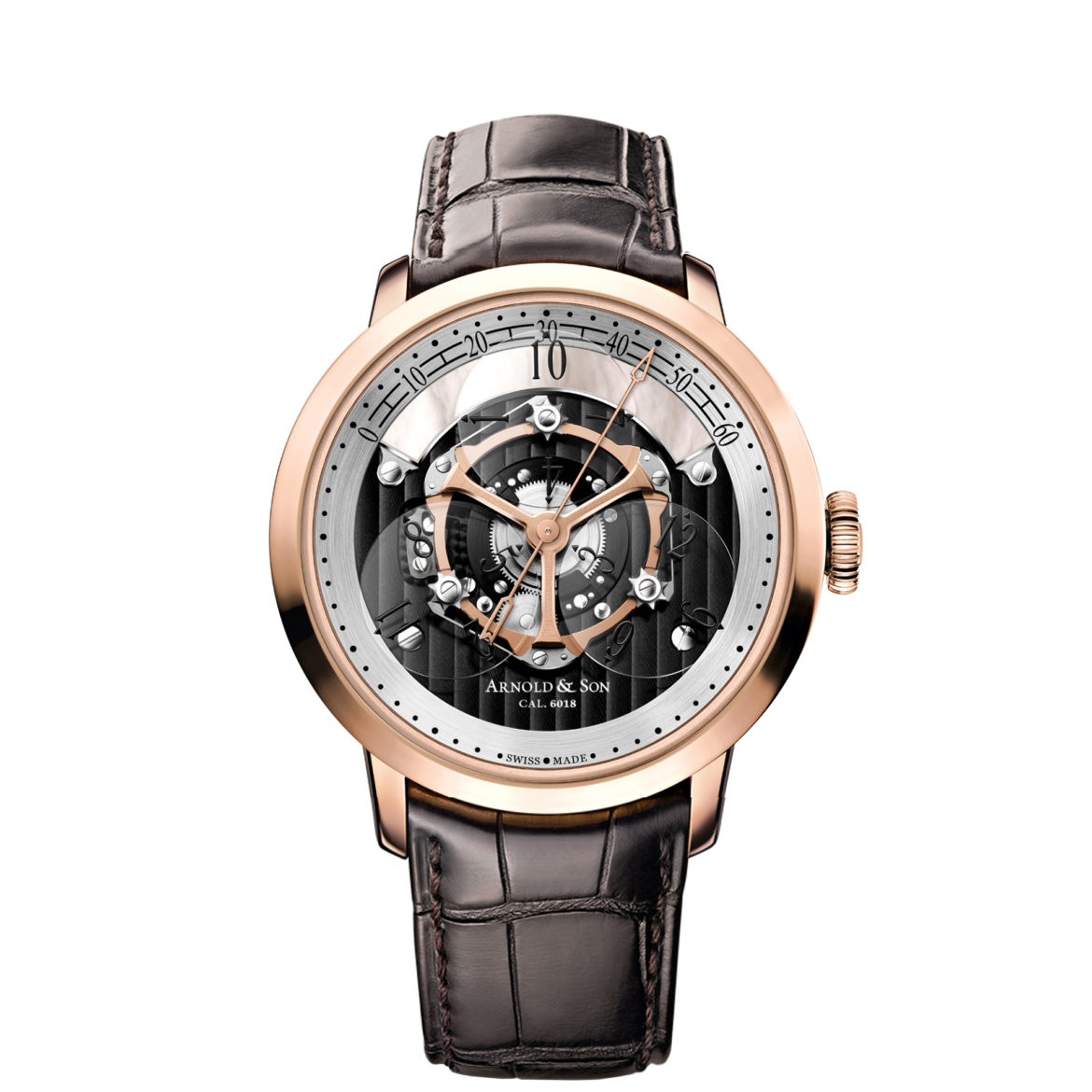 This version of the Arnold & Son Golden Wheel has a wandering hours and true beat seconds complication, quite unique. You might need some extra instruction about how to read the time.

Let’s take a look at the complications first. Wandering hours, also known as floating hours or chronoscope, show the hours floating on the dial. It replaces conventional hands with hour figures on rotating discs; when a certain hour figure reaches a certain point on the dial, it tells you the hours. That certain point is the mother of pearl area between the 10 and 2 o’clock position. This Arnold & Son Golden Wheel has three sapphire discs, each with four hour figures on it. The discs rotate independently and they are connected to the central wheel (Golden Wheel) which rotates as well. 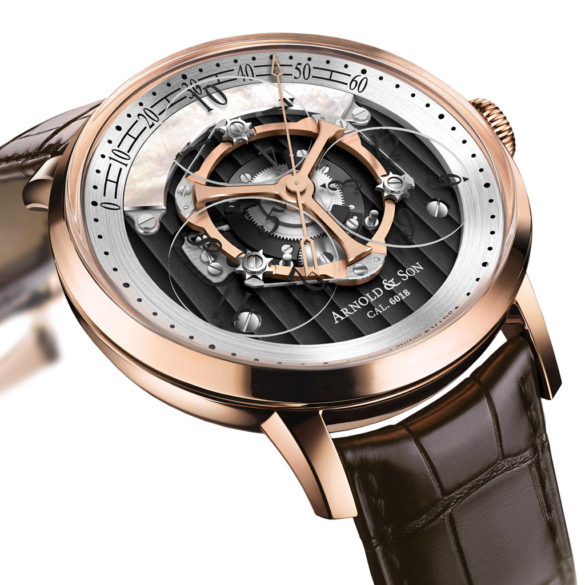 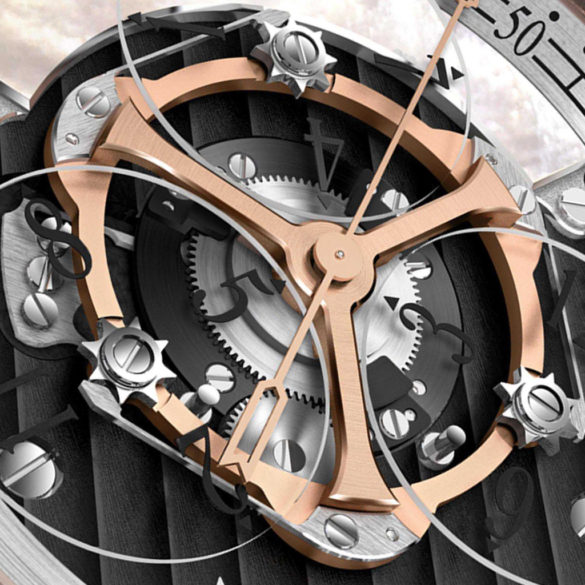 So, during one hour, just one hour figure from one of the discs is in the mother of pearl area, slowly moving by the minute. And each hour another disc is in that area. A single disc will only be there for an hour due to the hour figures on it and the mechanism that turns the central wheel.

Wandering hours are made since the mid-17th century with its roots in table clocks. This Arnold & Son Golden Wheel is a kind of three-dimensional interpretation of the ancient way the wandering hours complication was used. 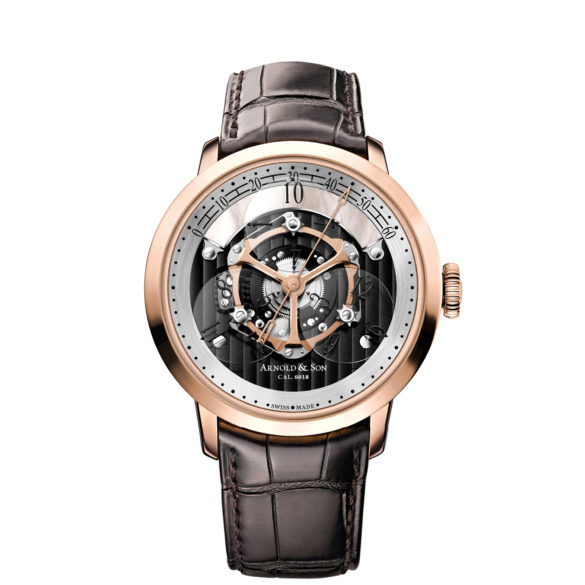 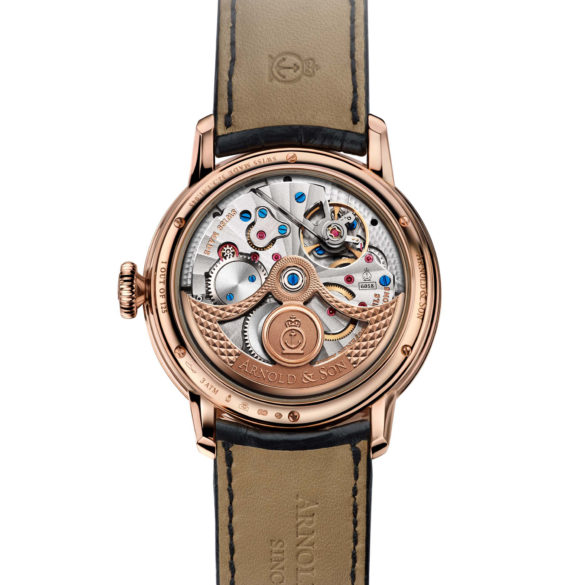 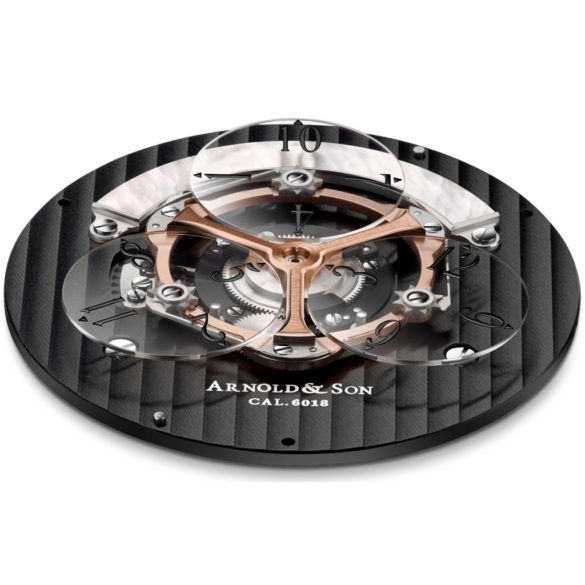 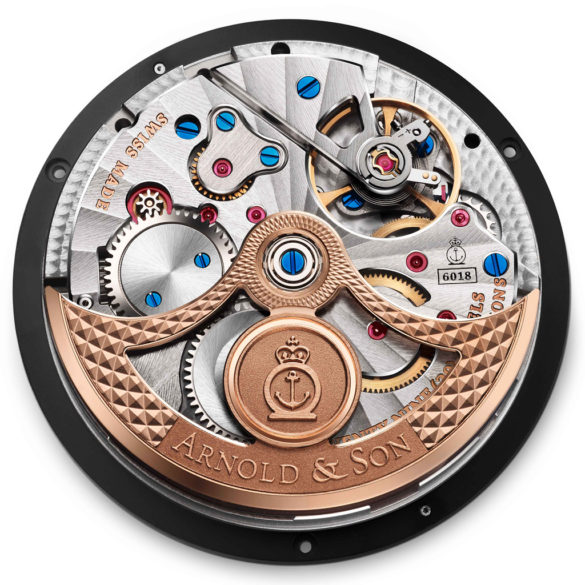 The other complication is the true beat seconds complication. Also known as dead beat seconds. On this watch the seconds are shown by the large central hand indicating each second on the dotted outside ring. The second hand isn’t moving smoothly like on standard mechanical watches but ticks every second. Indeed, like on quartz movements. Ticking seconds by a mechanical movement needs a complication. It doesn’t do anything else than showing you the seconds, but in a more animated way.

The treatment of the 3D movement is impressive. It is palladium treated with Haute Horlogerie finishing, it has hand-chamfered bridges with polished edges and fine circular graining and Côtes de Genève rayonnantes (radiation). The dial plate is black ADLC treated with Côtes de Genève, with circular satin-finished wheels and blued screws with beveled and mirror-polished heads. The central time-carrousel is from solid 18-karat red gold and satin-finished with hand chamfered and polished edges. The oscillating weight is also palladium treated and skeletonized with brushed surfaces.

Impressed? We are. This version is an update to the model launched in 2015, mainly to improve the contrast and legibility. Only 125 pieces are made.