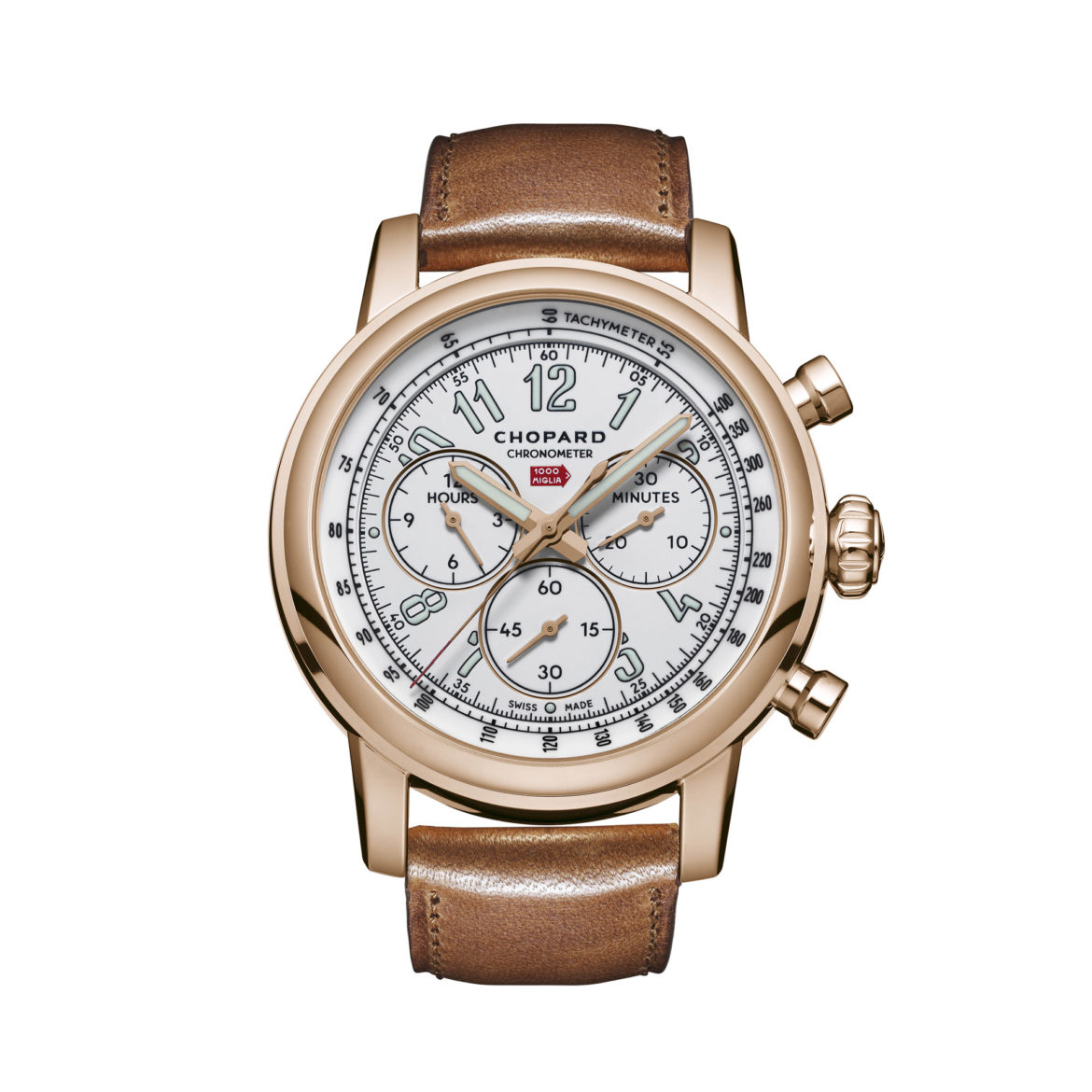 If you are into classic cars you probably know what the Mille Miglia is. And you probably know Chopard has a long history with the legendary race, going back to 1988. This year the rally itself celebrates its 90th anniversary, a good reason for Chopard to launch a limited edition: the Chopard Mille Miglia Classic XL 90th Anniversary.

We can keep on telling you about la corsa più bella del mondo as Enzo Ferrari called it. But this site is about watches so we’ll keep it short. It started in 1927 with a 1,000-mile race from Brescia to Rome and back. Brave men in iconic cars raced like devils on public roads ending with a tragedy. In 1957, a big crash killed a driver, his co-driver and nine spectators from which five were children. The Mille Miglia – Italian for 1,000 miles – was over. From 1958 to 1961 there was a rally-like Mille Miglia where they drove at legal speeds, with a few special stages driven at full speed. They discontinued that race as well.

In 1977, the race revived as the Mille Miglia Storica. A parade for pre-1957 cars driving more or less the same old route from Brescia to Rome and back. As said, it is a parade. Not a race. Although some drivers entertain the crowd with some speed (noise), in a very safe way. If you have the chance to be there, somewhere along the route, you will not be disappointed: from the 18th of May to the 21st of May. More info here. 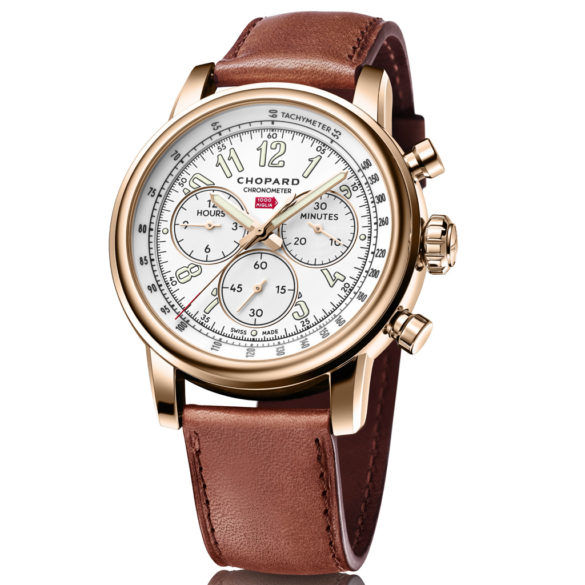 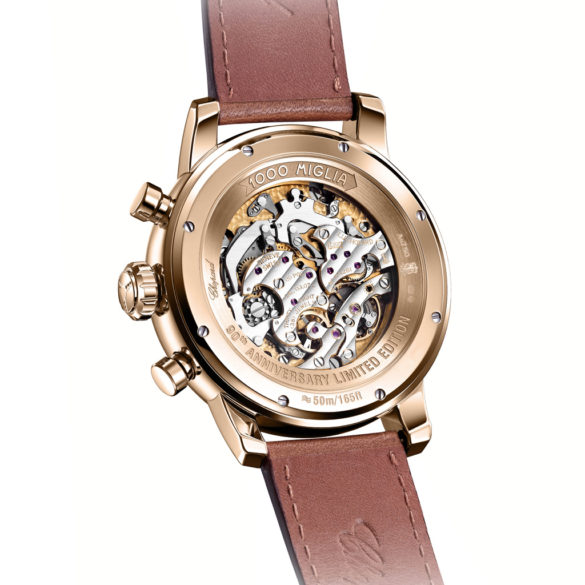 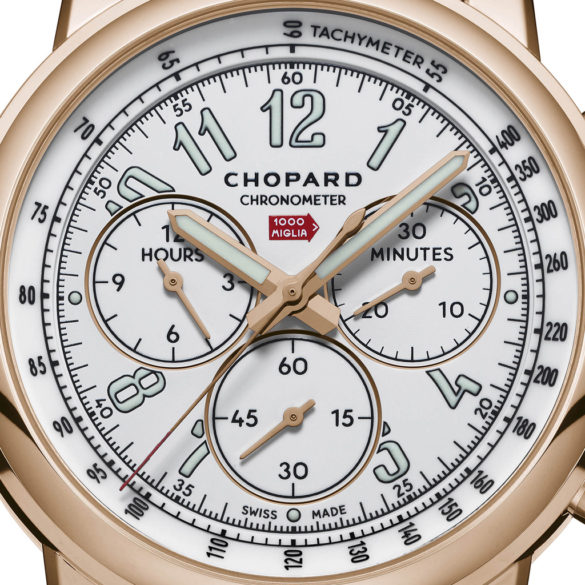 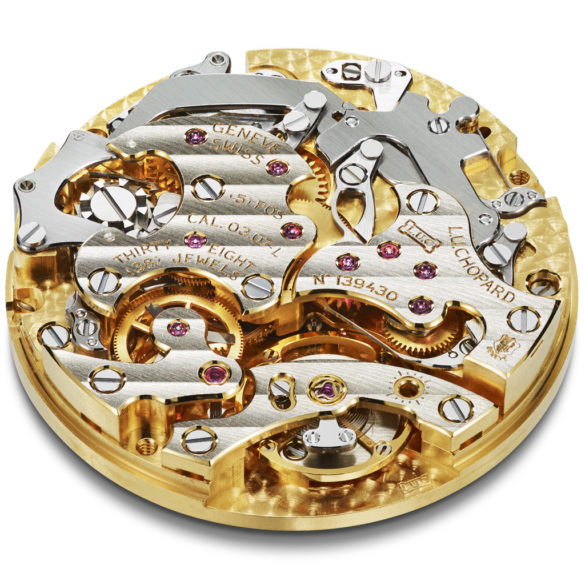 With the Chopard Mille Miglia Classic XL 90th Anniversary the Swiss brand somehow managed to create something that appeals to the classic race cars. Vintage dashboards often have a porcelain-like white color, with Arabic numerals and snailed counters, like the dial of the watch. And of course, a chronograph with flyback function as well as a tachymeter to measure speed appeals to racing too.

The 46-millieter meter rose gold case house Chopard’s L.U.C 03.07-L hand-wound movement. It is COSC certified and offers a power-reserve of 60 hours. The classic gold case with the vintage leather strap and the dial color and layout gives you this feeling of being part of something classic, racy and special. Again, go there if you can and smell the gasoline and rubber. And be quick if you want to go with this Chopard Mille Miglia Classic XL 90th Anniversary. Only 90 pieces are made. If you are too late you can always go for the regular Chopard Mille Miglia 2017 Race Edition.